On Derry’s Waterside, opposite the famous walls of the old city, lies an unusual “star fort” that was for decades the home of 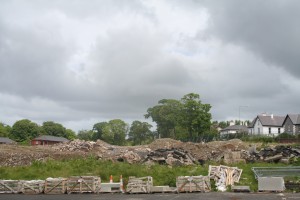 British Army troops sent to Northern Ireland. The Ebrington Barracks lies on strategically useful land (King James the Second placed his artillery there to bombard the city in 1689). The Waterside is also predominately Protestant and thus less hostile to British troops.

Only in 2006 did the last soldiers leave, raising the question of what to do with this infamous site.

I was lucky enough to get a tour of the reconstruction underway while finishing my trip to Northern Ireland in June. ILEX, a government-supported development company, is currently reconfiguring the base as a mix of housing, performance space, museum and shopping area.

The plans are stunning. Along with the site construction, the company has coordinated the placement of a new pedestrian bridge that will span the River Foyle, allowing people to make the easy crossing. The bridge is spectacular, with a Calatrava-esque harp design and a lovely S-curve. ILEX is under the control of the devolved government, meaning the First Minister (Peter Robinson, a Loyalist) and Deputy First Minister (Martin McGuinness, a Republican and former IRA commander in Derry).

At the time of the Bloody Sunday massacre, McGuinness was second-in-command of the IRA in Derry. The Saville Inquiry, released last week, cleared him of responsibility for any shots at British troops, though left open the possibility that he was armed that day and may have been involved in directing some of the IRA gunmen present.

As Deputy First Minister, McGuinness has earned the praise of even die-hard loyalists. He got along so well with former First Minister Ian Paisley (who should be cited as the original fire-breathing preacher) that the two were dubbed “the Chuckle Brothers.” As a prime mover of the Ebrington project for his hometown, McGuinness certainly does not lack for vision and big ideas.

Part of the reason for investining in the Waterside and constructing the bridge is that Derry remains deeply divided along sectarian lines. “Cityside,” meaning the walled city, the Bogside (where Bloody Sunday took place) and the mountains that line the invisible border with the Republic are overwhelmingly Catholic. The Waterside is Protestant and includes the area’s main hospital and train station. The one remaining Protestant enclave in Cityside is known as “The Fountain,” and has barely 200 residents (and shrinking).

So it is big, ambitious thinking to engineer a bridge and a new development that means to be non-sectarian. Funded by a European Peace III grant as well as governmental and some private monies, this is an attempt to recover from the Troubles and begin to remap Derry as a place where sectarian divisions should vanish. 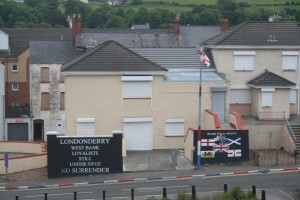 But then what about the history of the place itself, so upsetting for so many Catholics? Can a base used to launch Bloody Sunday, among many other affronts, ever be a popular picnic spot? I think of American examples like Wounded Knee (a sad, desolate spot) or the Crater (outside Petersburg, VA, a lovely, magical spot); moving further afield, could one ever conceive of a picnic at the Katyn Forest or in Oradour, demolished by the Nazis in 1944 in retaliation for an attack by the Resistance on German soldiers?

I’m not counting heads here, to equalize the number of victims — in important ways, that doesn’t matter. What matters is the emotional weight of the atrocity on a given population. Sure, life rolls on and we forget the dismal news of the past (we must forget to some degree). But is it too soon for Ebrington, with the Saville Inquiry just released? Or is this precisely the right time to “remake” the landscape into one that promotes peace? 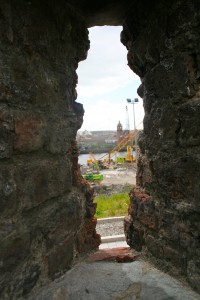 From an Ebrington gun sight to the Cityside, with Peace Bridge pylons under construction

One of the first things done to remake Ebrington was knock down the building where Bloody Sunday was planned. The argument was that the building itself, unlike the star fort walls or the once luxurious officers’ mess, had no architectural value and was in the way of the plans. At the same time, that building had huge meaning for the Catholic population.

Do you have to erase history in order to make peace? Or is there a way to acknowledge even the atrocities of the past as a part of peace?

I can see why ILEX, apart from any architectural argument, would want to get rid of the building. Sites have power, even when they were somewhat marginal to the actual atrocity. The real “site” of Bloody Sunday is and will always be the Bogside. At the same time, physically erasing the building sends precisely the wrong message, that by eliminating a site you are somehow trying to glide over its continuing importance. Other “sites of conscience” efforts have taken the opposite strategy. In Cincinnati’s excellent National Underground Railroad Freedom Center, they included as the first exhibit an actual slave jail, conplete with the place where the shackles were driven into rough wood timbers. It’s a powerful, haunting space even within this beautiful new museum. And I don’t think it causes only anger (though it certainly does provoke that); it is anger along with understanding and a sense that the whole history, even the bad parts, is getting the recognition and respect it merits.