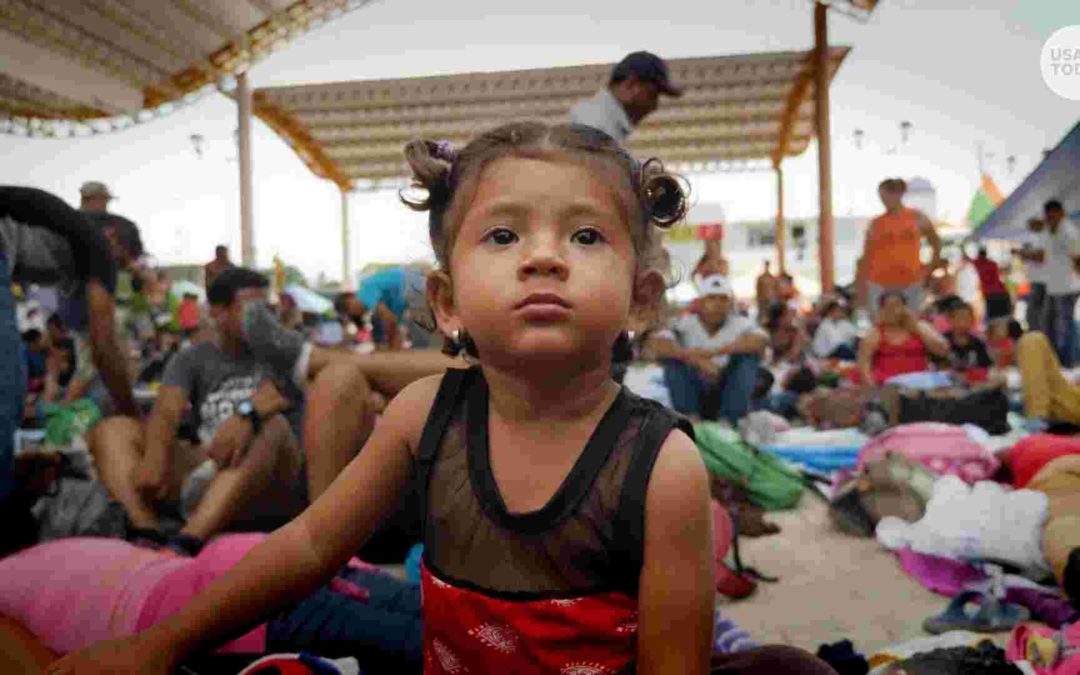 Every morning, Merriam-Webster sends a word to my email inbox along with its definition and history.

Some words are worthy of a college test. Recently, I learned that “crapulous” means the feeling after overindulging in alcohol, not — well, not that other thing.

One word I haven’t been sent yet is “caravan.” The medieval origin — in Italian, caravana, or from Persian, kārvān — evokes cross-desert treks, laden camels, tales of the Silk Road. The word also brings with it the idea of danger. To protect their lives and goods, traders grouped in caravans.

So the use of “caravan” to describe yet another group of people heading toward our southern border with Mexico to seek asylum is appropriate.

Most are families with children, according to human rights monitors. They face more than danger on the trek itself. Many are fleeing their homes because they know they or their children risk harm or death if they remain.

Ironically, the country they’re fleeing to, the United States, is also an important cause of their plight.

During the Cold War, Americans supported murderous dictators throughout Latin America. Starting in the 1980s, we decided to “fight” our own use of marijuana, cocaine and heroin not by addressing consumption, but by pointing the finger south at the suppliers. That approach, often called the “War on Drugs,” has failed spectacularly.

According a UN report released in 2018, our policies have unleashed “a decade of fruitless carnage, where millions of people have been murdered, disappeared, or internally displaced amid a blizzard of overdoses, spiraling addiction, executions, extrajudicial killings and incarceration… on almost every measurable level, this war on our own citizens has abjectly failed. Drug use and drug deaths have risen. Drug production has rocketed. Organized crime groups continue to use the drug trade as a vital supply line of cash.”

These organized crime groups, fed by our own addictions, have torn apart countries like El Salvador and Honduras. That country’s capital, Tegucigalpa, is considered “the most dangerous capital city in the world without a declared war,” one journalist recently wrote.

Instead of facing up to our poison legacy, the White House is choosing scare-mongering: according to Merriam-Webster, needlessly raising or exciting alarm. This is especially frustrating because the ones who are afraid — legitimately afraid — are these migrants who have banded together in a caravan precisely because of the threats they face as they journey.

So why has this president — and his Fox echo chamber — made the caravan into such a fearsome prospect? At first glance, it’s hard to justify. In 2016, the last year for which data is available, the Department of Homeland Security estimated that almost 75,000 Central Americans and Mexicans applied for asylum. These applications were handled through normal procedures and represented no threat to either our government or residents on the border.

All of the caravans that have reached the border so far represent less than a tenth of that number. As asylum seekers have arrived, there’s been no spectacular increase in crime, poverty, or generalized disruption of any sort. To the contrary, these newcomers do what most arrivals have always done. They enroll their kids in school, rent apartments or buy houses, get jobs, pay taxes, attend church, and start businesses.

They go to baseball games. They shop. They stroll the parks on Sunday.

What’s really happening in Washington is all too obvious. We’re being told to be afraid, to be very afraid, and then make political decisions based not on reason or facts, but on fear. We’re being indoctrinated, in other words, screamed at to believe what is essentially a lie.

I’d call it crapulous, but only after several shots of Kentucky’s finest.