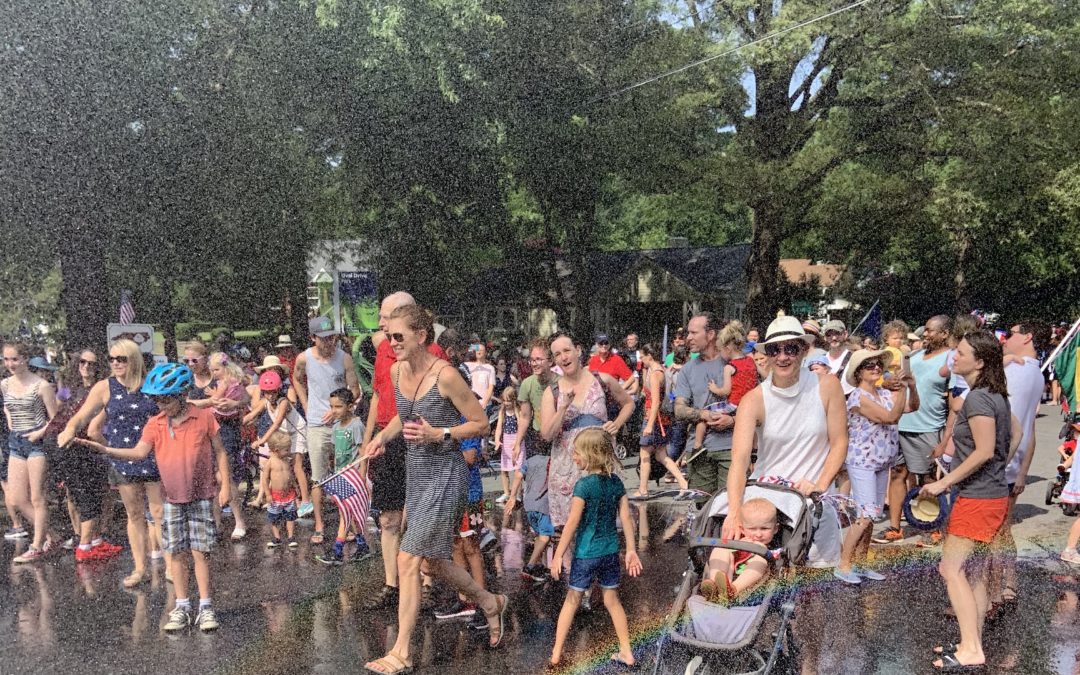 I spent June completing revisions on Book II, tentatively scheduled for next year. My days started early (5 am) and often ended quite late, a marathon of character development, pacing adjustments, and plot connections. I immersed myself so deeply in my story that I would dream about it. Every time I took a walk (or took a shower or revived myself with food), I’d think of a new problem or solution to a pesky roadblock.

One of the pieces of writing advice that helped me came from one of my editors at Blue Crow. In a blog post, Lauren Faulkenberry writes about “a series of chain reactions” for her characters. I kept thinking about that as I wrestled with the revisions. That concept doesn’t determine what will happen, only that whatever happens must be intimately connected and lead to a following, equally connected action. Each action must help illuminate character, move the story forward, create change, spark interest in the reader, and, above all, be true to the story.

It was in those intense moments that my characters “spoke” to me. I used to be impatient with writers who claimed that their characters communicated with them. That seemed too ethereal to me (plus I’d never experienced that phenomenon). But in the growing heat of June, a kind of magical thing did happen. As I searched for that perfect “chain reaction,” I was obligated to think deeply, viscerally, about how this character that I’d constructed would react: what they would think, what they would fear, what they would do. It was in these moments that the characters “spoke” to me, helping me create what I hope will be a gripping, unique story.

By the time I was finishing, I felt something else that was new: responsibility. I’ve created this world, and it’s up to me to do whatever I can to make sure that this world is preserved somehow. This is a special responsibility of those of us who write fiction and even more so those of us who create worlds that are spun out of our imaginations. Although The Bond has been out for over 7 months, I still feel a little jolt when a reader comments on a character or a twist in the story.

I panic—how do you know about this?—until I remember that, of course, this is printed in an actual book!

All of that and no taste of Book II? Here’s a little teaser, from the opening scene:

I never meant to kill my brothers.

As the hyba pack swings into the pine branches above our heads, I know that’s what I may have done. Seven days ago, I convinced my brothers to escape the city of Dolor. We were escaping our mother, a Captain, and Bounty itself. We were escaping the mother-bond that kept us at her mercy.

I told them the only way we’d ever be free is to run now, that day, before the helio fleet arrived from the south and blasted everyone to bits. None of us, not even our mother, will survive the Weave’s second attack, I told them. “What good is freedom to the dead?” I asked them.

Freedom: the shape word is a fist opening. My mother left me with a tongue, since she thought I’d need it as second to our commander. All but one of my brothers, our singer, is docked.

As I spoke to them, my brothers huddled in the shadow of Dolor’s lava beds. After a long silence, Tanoak answered for all eighteen of them. He’s strongest and most like my mother, with a red-brown top-knot and green eyes. We follow where you lead, Fir. To freedom or to death. You choose.

I didn’t tell them I had no more than fireside tales about the dangers awaiting us to the east. I can’t predict how far we’ll have to run to find this Master of men or even if we ever will. The Master rules a land to the east where men can be free.

Or so we’ve been told by the wildmen visiting our night fires. They also spoke of a draft Queen who lures wildmen who are never seen again. As we listened to their tales, we pitied the wildmen, sons rejected by their Captains and forced to fend for themselves. The lives of my brothers are weights I’ve carried ever since my brother Ash died.

I am a huge fan of James S. A. Corey’s “The Expanse” series. Corey is the joint pen name of authors Daniel Abraham and Ty Franck. The soon-to-be nine-book series is a sweeping tale about a future in which humanity has colonized much of the Solar System. But humans are still humans, and conflict brews between Earth’s United Nations, Mars, the asteroid belt and outer planets.

In addition to the books, there’s an excellent Amazon Prime show as well as short stories, novellas, and comic books. Currently, I’m on Book 2, Caliban’s War.

It’s a great next big read while I’m waiting for George R. R. Martin to finish Winds of Winter, Book Six in the “Game of Thrones” series.

One of the best things about the “The Expanse” series is how effortlessly the authors incorporate gender, racial, and cultural diversity. One of my favorite characters is “Gunny,” aka Roberta “Bobbie” W. Draper, a Martian gunnery sergeant. In the Amazon Prime television series (equally excellent), Gunny is played by Frankie Heard, a New Zealand-Samoan actress who captures both Draper’s uncertainties about her loyalties and her strength and willingness to kill in the service of her commanders.

I was very lucky to have The Bond recognized by two awards this summer. In June, Foreward Reviews chose The Bond for its 2018 Bronze Indies Award for YA fiction. Also, The Bond was a finalist in The North Carolina Speculative Fiction Foundation’s 2019 Manly Wade Wellman Award for North Carolina Science Fiction and Fantasy.

I had a great time talking about The Bond with my colleagues at the Franklin Humanities Institute, who chose the book for their summer read. There’s nothing like a group of committed, interesting readers to illuminate parts of the story I hadn’t thought about before.

I’m really looking forward to taking part in the LoonSong Writer’s Retreat in early September. I’m especially looking forward to seeing one of my former faculty members from the Vermont College for Fine Arts, Elizabeth Partridge. Friends who’ve taken part tell me that the weekend is the perfect combination of writing, workshopping and enjoying the late summer delights of a Minnesota lake. I’m up for all three.

I’ve started following a new Twitter hashtag, #vss365. Every day, writers all over the world respond to a word prompt with poetry, prose, photos. It’s fun! Here’s my response to #fury:

Imperator Furiosa is indifferent to your wails, your #fury, your incessant attack. She has armored herself, of course. But it’s more her mind: already past you. She’d give everything for that cosmos: to see it flower. You, however, are already dust

Photo of the month

I’ve taken out most of my ornamental plants and grass, replacing them with pollinators and natives, mostly gifted from neighbors. This helps the critters with food and habitat.

It’s high summer, but there’s been an unusual amount of rain. The garden loves the moisture (the tomatoes, not so much). One of my favorite plants is this wild cosmos. Over several years, I’d strip off the seeds from plants by the sidewalk. So now, I have a lot of it! The bright orange petals always brighten my day.