When he was a boy, my dad received a marvelous gift: his father’s own boyhood rifle.

It’s a beautiful object. Burnished wood stock, a thundercloud-grey barrel. After my dad died, it was the one thing I really wanted. At this moment – 2:45 a.m., cat stretched beside me in my Durham home, dog twitching on some dream chase, my daughter sleeping in her room – my dad’s gun hangs on my dining room wall.

My dad was one of seven. This recognition from his taciturn father thrilled him. As soon as he could, my dad went hunting. I never asked, but I imagine ammunition was dear enough not to waste. He would have sighted his target a fair number of times before risking a trigger pull. Then he shot a living creature, a mourning dove.

In that instant, his love of guns was overwhelmed by grief. You may smirk that the death of a bird converted my dad into an anti-gun nut, but there it is. He was crazy about animals of all kinds, including hard-to-love rescue beagles, neuro-pruned to detect even a human’s unfulfilled musing about food.

My dad removed the firing mechanism and turned the gun’s trigger backwards.

Honestly, I have to point that out to visitors. Despite Americans’ internationally infamous love of guns, less than a quarter of adults actually own one. Three percent of Americans own nearly half the nation’s guns. Despite our fearsome reputation, gun ownership is in decline.

Not that you’d catch that from the current gun debate.

In the middle of the night, it’s hard not to imagine the terror of being in Las Vegas with death raining down, the very definition of indiscriminate. A nurse, a teacher, a fisherman. Sons and lovers, wives and uncles, our gruesome slog. My dad’s army service in Korea only intensified his loathing of guns. When I got my first chance to fire one, I felt guilty for my exhilaration, then made sure I aimed squarely at a bean can.

One and done for me.

Family history is partly why I reacted so strongly when I spotted an anti-Klan protestor brandishing an AR-15 and two extra clips in downtown Durham in August (being shot at in the Andes as a human rights researcher taught me something about gun ID). Only a close reading of his antifa T-shirt distinguished this 30-something white male from a Nazi – or a random nut.

This was in the wake of Charlottesville, where white supremacists and anti-fascists came itching for a fight. The police withdrew, to disastrous result: the murder by a white supremacist of a local protester, Heather D. Heyer. Some non-violent protestors said they appreciated the antifa’s eagerness to fight marchers. Others expressed concern that the city streets became a toxic fight club.

My 18-year-old son inherited his grandfather’s loathing of guns and love of living things. He texted me a brief video of Main Street.

In Durham? he asked, incredulous. Where’s the Klan?

Are you out of range? I responded.

After I expressed disbelief on social media, some responses surprised me. Dwayne’s a nice guy, commented mutual friends. He drills. He was there to defend us.

My inner dad raged. When Dwayne aims a gun designed solely to kill human beings, he becomes judge, jury and executioner. What if someone whips out a bigger gun? What of marchers who flee in terror, having lost a loved one to a nice guy, chill, so quiet, like the Las Vegas shooter?

Nice guys can have dark secrets. And bupkus in the way of experience in a melee.

What if Dwayne misses?

What if Dwayne doesn’t miss.

To those friends, I ask: when did we normalize, excuse and accept killing people as part of making the world a better place? The data is crystal clear: guns make us less safe, dramatically so, especially women and children. My dad knew this. I know it. My son knows it. People are slaughtered in churches, dance clubs, class rooms, offices, malls but most especially in their own kitchens and bedrooms. For my part, I clearly remember the 2 am shots that ended a neighbor’s life (hand gun, jealous boyfriend, we thought he was such a nice guy).

Listen: our senators Richard Burr and Thom Tillis are so deep in the NRA’s pocket they might as well be living on pure lint and Nicorette (in top four lifetime recipients of NRA cashola). But you and I are not. It’s time to look our gun-owning friends in the eye and say: 586. 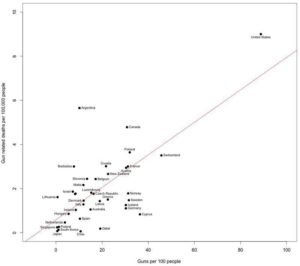 To gun owners: do what my dad did before it’s more than a dove you’re grieving. Remove the firing mechanism, turn the trigger backwards. Display the gun if it brings you joy.

But stop claiming you’re protecting anyone. That lie died in Vegas.

Published in the Durham Herald Sun on October 5, 2017.