I’m thrilled to announce the March 11, 2016, release of my new (and FIRST) poetry collection, Peculiar Motion. The book will be released by Finishing Line Press, an award-winning small press out of Georgetown, Kentucky. Please preorder if interested (more preorders means a bigger press run!) by contacting them at flpbookstore@aol.com.

Two wonderful poets, Jennifer Gresham and Eliza Griswold, were kind enough to read a draft and give me blurbs. 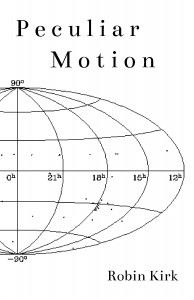 Gresham, a former Air Force officer and biochemist, is also an accomplished poet and author of Diary of a Cell. “The news pundits often talk of the extremes: the haves versus the have-nots, the winners versus the losers. Robin Kirk’s Peculiar Motion explores instead the murky, mysterious middle, presenting a collection of odd perspectives and simple, heart-breaking truths. As she makes plain, ‘Who has not lost, and lost heart?’ These delightful poems will force you to re-think the concept of defeat in the modern world and illuminate how all of us might find the strength to rise again.”

Griswold called the collection “fierce. Kirk stares at the beloved and ruined world around her without blinking. They are quiet and wondrous rebellions.” Griswold is a Guggenheim and PEN Award winner and author of Wideawake Field, a collection of poetry.

I named the collection after the astronomical term describing the motion of galaxies. I came across “peculiar motion” when I was reading about the big bang theory and how the universe is expanding. But a few galaxies are actually moving inwards, against what the theory predicts. I thought this was a lovely metaphor for life. Things don’t always go according to plan and that’s what this collection is about.

Here’s the poem that gives the collection its name. I’ve also been posting poems on Instagram at robinakirk and Tweeting (@robinkirk).

The universe is getting bigger, it’s agreed.
The outer edge expands while within, space
fills, a party balloon of infinite size. The galaxies

move outward, too, their dark centers, the fearsome

fleeing oblivion or whatever lies beyond. “Peculiar motion,”

and the mish-mash of all the rest out there –

run for cover. You’ve got to admire such contrariness.
It’s one thing for mortals, shattered by a flick of celestial

funk, to challenge the inevitable. Quite another for the

gassy nebulae to shrug, “No thanks.” How would it feel,
I wonder, to traverse the Big Bang’s outer shell, time

beneath our boots and – what?— above. Perhaps

that shell is hard as white granite, stepped, little pools of rain
cupped in the hollows. We’d savor the view. And at the top,

after a long and weary climb: a hushed lake, some fish,

a stand of pines. Beneath us, the rainbow of our world,
reminding us of its spectral beauty, pointing us home.