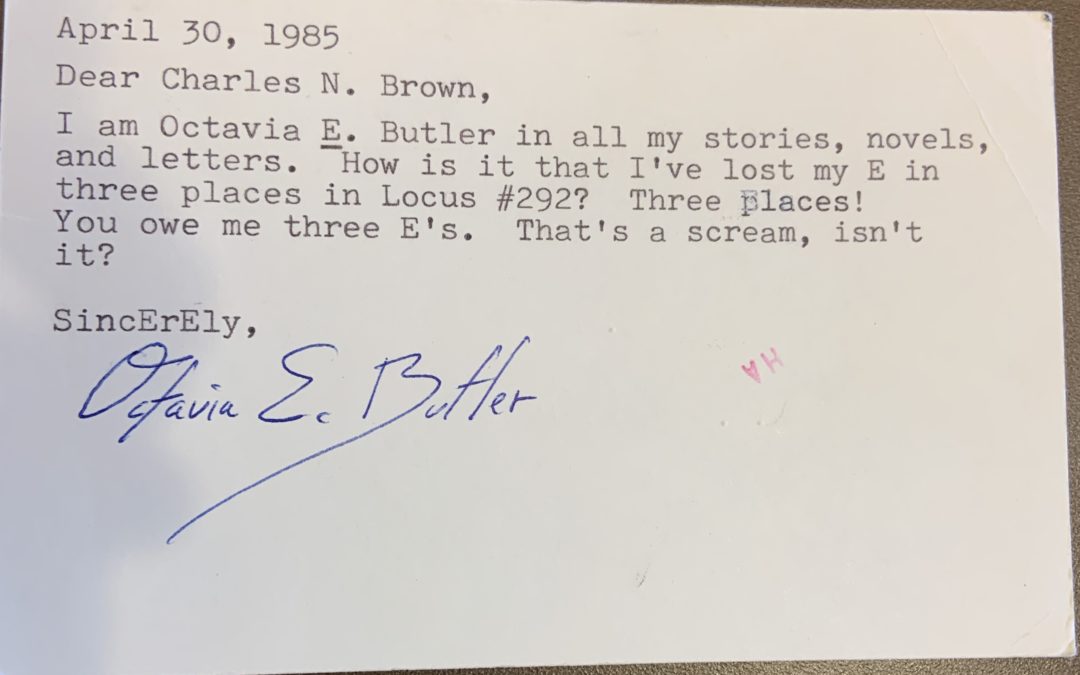 “Science fiction is one of the greatest and most effective forms of political writing.”
Nnedi Okorafor, award-winning author of the Binti series

As a longtime human rights advocate as well as a sci-fi writer, I believe this genre has inspired more than objects. Through the lens of story, we’ve also explored ideas about how society could or should function. Women writers especially have tested the boundaries of what it means to be human and live in connection with other humans.

And that shapes what rights we think we do or should have—even who should have rights at all. This observation is almost as old as science fiction itself. As the world careened toward World War II, H.G. Wells—author of War of the Worlds, The Time Machine, and The Invisible Man, among other works, and a committed socialist—wrote “The Rights of Man,” a prescient treatise that proposed not only political rights, but rights to nourishment, housing, health care, and a home.

In “Imagining Human Rights: rights through the lens of speculative fiction,” a class I taught this semester at Duke University, I relied on authors like Ursula K. Le Guin, Octavia E. Butler, and Nnedi Okorafor, among others, to explore how women writers have compelled us to examine the complexities of rights and how they may shift—or explode in our faces.

I started the course with Le Guin’s deceptively simple short story, “The Ones Who Walk Away from Omelas.” For me, the story presents a powerful allegory for our willingness in modern society to accept the suffering of others so long as we are comfortable. In a 2018 Paris Review interview, N.K. Jemisin described a category of what she called “Omelas stories,” which, like Le Guin’s spare tale, “gut punch(es) you with the fact that this is the reality of living in a modern capitalist society. You are living at the expense of, amid the pain of, a lot of people who have suffered to bring you the wonderful lifestyle that you’ve got—if you’ve got that wonderful lifestyle at all, which a lot of folks in this country right now do not.”

Some students had read the story in high school and remembered the relatively simplistic moral they’d gleaned. Of course, they stated, one should walk away from such suffering. Using Jemisin’s analysis, I pressed them. Walking away changes nothing for that child. How, exactly, are you looking for that metaphorical child in your life? While some of my students come from wealthy families, others are first-generation and overcame immense obstacles to go to a place like Duke. They felt they had “earned” the right to be there. But what would it mean to really open that door and peer in at the child whose suffering helped make their success possible? Would any of them—could they—walk away from the Omelas that is Duke’s verdant campus?

The class came alive on the day we discussed Butler’s “Bloodchild.” Previously, we’d visited Duke’s Locus Archive and I’d helplessly fan-girled over a Butler postcard to her editor (“I am Octavia E. Butler in all my stories, novels, and letters. How is it that I’ve lost my E in three places in Locus #292? Three places! You owe me three E’s.”). “Bloodchild,” winner of a 1984 Nebula Award and a 1985 Hugo Award, forced the students to detach from gender norms and ask what assumptions they had about rights when faced with survival.

Butler’s protagonist, Gan, is a male human born on an alien planet. With his family, Gan lives in a protected reserve run by T’Gatoi, a Tlic noble. T’Gatoi is a gentle, though firm, ruler. The pact with humans is simple. Each family commits one male child per generation to incubate a Tlic egg.

As with Butler’s other stories, including the mind-bending Xenogenesis series, the relationship can’t be distilled into a simplistic narrative of slavery or gender-bending. Butler maintained that her inspiration for “Bloodchild” lay in issues of sex and gender. These categories presume trade-offs around rights, especially as we edge into worlds where bodies (and body parts) are purchased and hired to create and carry children. In many areas, gender fluidity is replacing gender binaries. My students went over allowed class time as they discussed how this story related to their own lived experience around consent and future plans to have or not have children.

We even drew the Tlic, an exercise in disgust and fascination. I certainly could not have written the books in my own gender-bending fantasy series, The Bond and The Hive Queen, without having first read Butler.

Sadly, our in-person discussions were interrupted by the COVID-19 pandemic. I’d managed to somehow pair the cancellation of classes with the assignment of M.R. Carey’s The Girl with All the Gifts, planning to frame a discussion of rights and climate change once students returned from Spring Break. As it turned out, Carey’s apocalyptic tale and his unforgettable heroine, Melanie, were just as suited to a discussion of pandemic as rebirth and reveal.

Our final assignment is Nnedi Okorafor’s “Spider the Artist,” which takes place in a future Nigeria where multinational corporations defend oil pipelines with spider-like zombies. Fitting for an end-of-class discussion, the story introduces students to a woman who chooses to stand up for justice. In an interview posted to her blog, Okorafor says this story was the first she wrote consciously as pure science fiction.

The story is so rich in sensory detail that I wonder if my students will enjoy feeling transported from their quarantine homes into a Nigerian village so damaged by exploitation that “The air left your skin dirty and smelled like something preparing to die. In some places, it was always daytime because of the noisy gas flares.” Okorafor gives us a rich palette of Nigerian folklore, current politics, and the life experience of so many oppressed people, at the mercy of savage capitalism yet still determined to be human and fight for their rights. For Okorafor, “science fiction is one of the greatest and most effective forms of political writing.”

Only recently have women been fully recognized as having shaped our science fiction imaginary (despite the fact that the creators of the genre include writers like Frankenstein’s author, Mary Wollstonecraft Shelley, whose mother was a women’s rights champion). In some cases, the contributions are seismic in terms of rights and not confined to the page. Sometimes, just the fact that people of color, women, and the disabled, among others, are visible, regardless of what they are producing, is a rights advance.

For instance, Nichelle Nichols, the actor who played Lieutenant Uhura on Gene Roddenberry’s original Star Trek, famously considered leaving the show to return to her first love, musical theater. After telling Roddenberry, she happened to attend a fundraiser where the organizers asked to introduce her to a fan. She was shocked when that fan turned out to be the Rev. Martin Luther King, Jr.

King told her that Star Trek was one of the few shows he and his wife, Coretta, watched with their three children. When she told King she planned to leave the show, he protested. With the role, he told her, she was showing the world that African Americans were accomplished and capable of doing anything, including traveling the universe.

Nichols chose to remain. She went on to push NASA to recruit more women and people of color, helping to bring in Sally Ride, Guion Bluford, and Mae Jemison, the first black woman to go into space.

When I teach the class again—hopefully with this pandemic in our collective rear-view mirror—my challenge will not be to find material but to pare down the richness of what’s available. My students have helped me see science fiction in a different way, now through the lens of a generation shaped by pandemic and profoundly familiar with how life and their prospects can change in an instant. My one hope is that these stories will help them cope with those changes and feel less defeated by them. It’s a challenge to all writers to find ways to help people understand that they matter and that stories can help us see each other and our planet as precious.