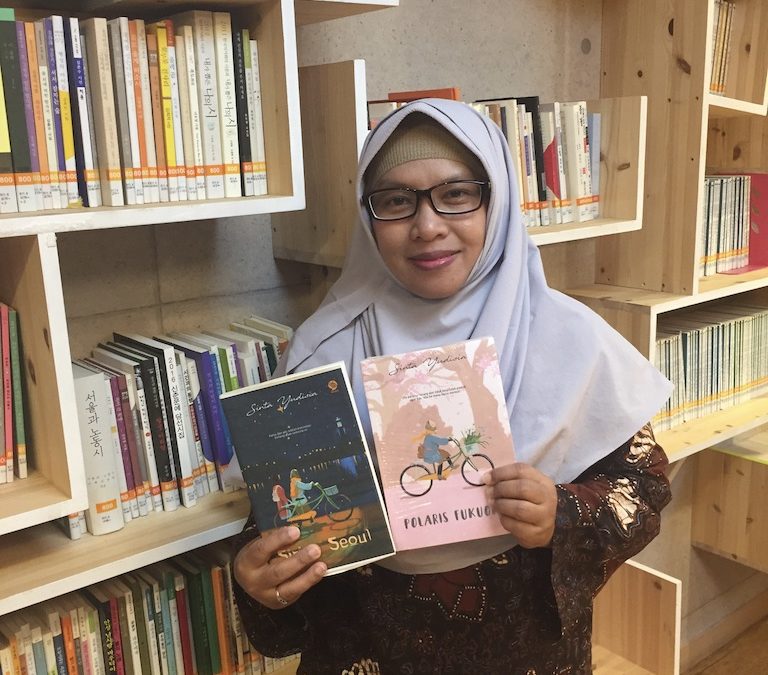 When I learned that I had been accepted to a month-long writing residency at Seoul Arts Center-Yeonhui, I prepared by learning as much as I could about the city and South Korea. What I couldn’t prepare for was meeting one of the world’s most interesting and prolific Young Adult writers: Sinta Yudisia. The author of over 60 books, Sinta is a rock star in Indonesia, her home. She’s also a fascinating person who is an #ownvoices treasure.

I interviewed Sinta in the Seoul Arts Center-Yeonhui library, a pleasant space built into one of Seoul’s many hills. The bookshelves are wonderfully – and intentionally — crooked and the lights are shaped like giant commas. Sinta came with a copy of her next book, Sirius in Seoul, a sequel to Polaris Fukuoka and featuring the same heroine, Sophia. Sophia is an orphan who lives with her uncle. He has a job in Japan, then South Korea. Like Sinta, Sophia is a devout Muslim who is also passionately interested in travel, language, other cultures, and books. She’s written for adults as well and also has several non-fiction books, including books about the unique cultures of Palestine and Indonesia. The book Sinta wrote about Indonesian culture is Reinkarnasi, about the magic and the power of keris, traditional Javanese swords.

Indonesia is the world’s most populous Muslim-majority country. Located in Southeast Asia and surrounded by the Pacific, Indonesia is also the world’s largest island country. The country is an #ownvoices master class, with hundreds of ethnic and linguistic groups.

Sinta spent part of her time in Seoul visiting locations she used in Sirius in Seoul, scouted on a previous visit, and making galley corrections. As yet, her work hasn’t been translated from Indonesian to English, so I’m hoping this interview snags Sinta an interested translator and publisher. This interview was originally published in YA Interrobang.

Tell me a little about yourself.

I’m from Surabaya, a port city on the Indonesian island of Java. This city mixes up the modern with canals and buildings from our Indonesian and Dutch colonial past. I’m a psychologist by training and I’m married with four children. My eldest, a girl, is 22. I started writing in 2000 with a book about cats. Then I wrote When Upi Asked (Ketika Upi Bertanya), a fable about a butterfly family, and Cici’s Promises (Janji Cici), about a family of cats. I write about three books every year, including short story collections. Usually, I get up in the middle of the night to write for a couple of hours. Then I have to get my family off to work and school. When I was a child, I had such a big imagination. I wanted to fly, be a police officer, be a princess. I’m able to explore that imagination as a writer. I get a lot of ideas from what I’m reading and from my dreams, even when they are nightmares.

Who are some of your favorite writers?

I have so many! Leo Tolstoy, Anton Chekhov, J.K. Rowling, Naguib Mafouz. One of my favorite writers for children is Jostein Gaarder. He is a Norwegian who’s written novels, short stories and children’s books like Sophie’s World: a novel about the history of philosophy.

Who is your ideal reader?

I love readers who give me feedback, including through social media. I like when they’ve really engaged with a book and encourage me to dig deeper into character and explore more what’s going on with my characters emotionally. I promote my books on Instagram, Facebook, Twitter, and on my blog and also do school and bookstore visits. Most readers in Indonesia are female and many of them have a big question: who am I? They want to be global citizens and are on social media constantly but at the same time they are Indonesian. Many have friends on social media but not in real life. Sophia, the main character in Polaris Fukouka and Sirius in Seoul, is also Muslim and is dealing with how she remains faithful to her religion when she’s with friends who aren’t Muslim.

Your two most recent books follow Indonesian teens in two of the most interesting teen cultures in the world, Japan and South Korea. Why did you choose these settings?

Indonesian teens are very fond of both Japan and South Korea. They love K-Pop! (I include a “Best of K-Pop sampler below.) I wanted to write about a girl who is in both places and struggling with what it means to be herself. Sophia has to live with her uncle, who works in Fukuoka, then Seoul. In Seoul, she is on summer holidays. She is looking for her secret cousin, and here the adventure begins. Sophia learns a lot about herself in these two places. She has to adapt to live as a Muslim wearing a hijab. She doesn’t eat pork or drink alcohol, but she can still have friends who do. For instance, Sophia wears batik, an Indonesian dyed cloth, as part of her fashion and way of honoring where she was born and who she is.

How has it been for you as a Muslim woman wearing a hijab in Seoul?

I’m really interested in languages, so I am learning both Japanese, which is really hard, and Korean, a little easier. People do look at you when you are walking or on the bus. There’s a perception that Koreans are pretty racist, but that hasn’t been my experience. I was in the gardens the other day, when it was quite hot. Some Korean women came up to me concerned that I would faint in the heat. I explained to them that my clothing is cotton, so I was just fine.

How does your faith influence your writing?

As a Muslim and a writer, I strive to make myself and the world better every day. I want to contribute to making the world better. Even though I’ve published more than 60 books, I feel like I can still write better.

Can you share your thoughts about #ownvoices and what is happening in Indonesian writing for children?

There is not yet a strong sense of expanding the kind of writers publishing for children. But, for about 2-3 years, there has been “Room to Read,” founded in San Francisco. That project has a goal to improve literacy and gender equality in Africa and Asia, including Indonesia. One of their efforts is to gather Indonesians writing children stories, train them and try to help some works get published. They are especially interested in stories that have a unique background, unique setting, and unique storyline.