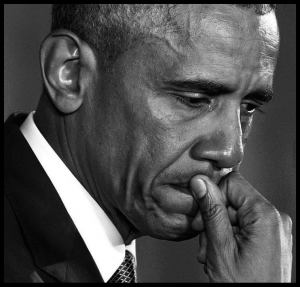 Obama at his January 5 announcement on gun control. Posted by Malia Obama to her Facebook page

My wonderful colleague Joy Olson, the executive director of the Washington Office on Latin America (WOLA), posted this to her public Facebook page on January 6. It’s her account of President Barack Obama’s historic announcement on gun control on January 5.

Yesterday I had an experience that will stick with me.

I was at the White House when President Obama presented his executive actions on gun policy.

WOLA has been working on gun violence issues, in particular weapons trafficking. We started this work in response to the social movement in Mexico made up of victims of violence. The stories we heard from the families of victims were traumatic and moved us to act. We wanted to find a way to do something here in the United States to help reduce violence in Mexico.

Our work on the effort to address gun violence is small compared to many others.

But because of that work (much of it done by Clay Boggs, who just moved from WOLA to work in Congress) I was invited to the White House yesterday for President Obama’s presentation of executive actions on gun policy.

Upon arrival, I made my way into the corner of the august East Room of the White House. We were ushered into the room well ahead of the official event. Within minutes I realized that I knew only a handful of people in the room.

But it was a friendly crowd and people began introducing themselves. It didn’t take me long to figure out who surrounded me. The man to my left was from Pittsburgh. He had lost a son to gun violence. In response he created a foundation and programs for kids in his community. Others with whom I shared a row were from Arizona. A couple next to me pulled out a picture and I realized that they were the parents of Christina Taylor-Green. I remembered her. She was the little girl who died when Gabby Giffords was shot. The stories continued.

I was sitting amidst the survivors of gun violence and their families.

These people, who have the most legitimate reason to be hateful and disengaged, were there, all of them involved in some way in the efforts to stop gun violence.

The President spoke. His words were heartfelt. It was a profound speech. We were all brought to tears. He referenced Martin Luther King’s phrase about the “fierce urgency of now,” and I felt it.

While the President’s words and actions were important, I am most affected by those who surrounded me. The man from Pittsburgh, at one point, speaking to himself said, “my cup runneth over.” There was such sorrow and such determination in our row, and such gratitude toward those who were willing to work to stop this madness.

When I explained to one rowmate why I was there, and what WOLA does, she thanked me for my work. It almost seemed absurd. Our work seems so small when compared to her pain.

As I reflect on that moment, I go back to the reason WOLA first looked for a role in the gun violence prevention work in the United States. It was because we talked with victims of violence in Mexico. We understood that violence is not a problem that you solve in one place. That illegal weapons used in Mexico are trafficked there from the United States, and that one thing we could do is to try to stop that trafficking.

I can’t say that our efforts have been a great success. Not yet.

I can say that I walked away from today’s presentation at the White House recommitted to the effort and recommitted to the idea that we all need to do what we can where we are to stop violence. For WOLA that means working on arms trafficking.

I wish that the whole country could have been in that room. If we all could have fit, I have no question that our country would change its gun policy.