As I prepared for Hurricane Matthew’s arrival, I took a little time to reread E.B. White’s classic “The Eye of Edna.” Published in The New Yorker, White describes how he follows the track of Hurricane Edna as the storm moves up the east coast in 1954.

This was well before 24 hour news, dedicated weather channels and Doppler radar. White secures his Maine farm, checking on the storm via radio. White wrote the classics “Charlotte’s Web” and “Stuart Little,” and the voice is similar: wry and observant yet brooking no fools. After securing what they could, White and his wife, the talented editor Katherine White, settle in to wait. 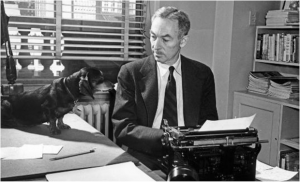 And wait. And wait some more. At one point, a reporter seems insufficiently alarmed at the storm’s intensity. White writes that he “could not be quite sure what position the radio was taking – for hurricanes or against them.”

The writing moved me, though not for the usual reason. I couldn’t help but contrast those times to now and our seemingly endless political hurricane. As I write this, Campaign 2016 enters its final, gruesome days. Many of the voices I hear are decidedly for the storm and even cheer the destruction of our shared civic life.

I’ve been out registering voters, in the conviction that we all have a stake and should all have a say. The first person I registered was an 18-year old black male waiting for a bus. After I obtained his signature, I suppressed my desire to rant at him that this campaign is like no other, look away from the horror, and just vote.

Most of the time, people have been kind. The heat of late summer eased as I shadowed the doors of Compare Foods or the Durham Bus Terminal. I was often thanked by those who took the time to fill out a form or who always vote.

Every so often, though, someone – I have to say it was always an older white man – shook his fist or said something unkind. It would have been easier for them to simply walk by, but these fellow Americans went out of their way to insult me for performing a non-partisan, civic good.

And there we are, 2016 in swing-state America. I walk the dog by Ellerbe Creek in the now crisp fall air, marveling at the calls of geese migrating south. Later, I check Twitter or Facebook or my news alerts and see death threats against reporters, putrid anti-semitism and even a defense of rape culture. On a Saturday night, I might indulge in Beyu Caffe jazz or take in a Northgate movie. Then the Sunday paper presents another minefield, horrid compared to White’s gentle world of berries and eggs and the radio hum.

In the pre-hurricane grocery store scrum, there’s an almost festive air. Unlike our neighbors to the south and east, Durham hasn’t been hit hard by a hurricane in over a decade. Yet I also feel like we’re being hit hard every day by the way we talk about our country – and especially the way we treat each other. To paraphrase one slogan, America has always been great – and also terrible and complex and violent and striving to be better. In these months, much of the poison coursing through our past has been brought to the surface. What will become of it we don’t yet know.

After Hurricane Edna passed New York, White frantically spins the dial for further news. But New Yorkers were quit of the storm. Edna barreled toward the Whites as the rest of America listened to baseball. Life goes on, in other words, even when you’re in the midst of the tumult that’s passed everyone else by.

Just as the winds become truly terrifying, White writes, the radio broadcast a whistling act and someone playing a glockenspiel. “There are always two stages of any disturbance in the country – the stage when the lights and the phone are still going, (and) the stage when these are lost.”

I tell my northern family, the worst of a hurricane is often after the winds cease, when floods rise to a terrifying race to the sea. Here’s the single blessed thing about hurricanes – and all natural disasters, really. They tend to bring people together. They demonstrate in vivid detail that we are better off being kind to each other, helping each other, and not thinking the worst of our fellow travellers on this earth.

Once Edna departed the coast, the glockenspiels came out for the Whites. The chickens laid their eggs, the spiders wove their webs and White and his wife tuned into the game.

Truth be told, what scares me most about this political season are not the vile words or even the violence. I’m afraid that the poison won’t drain away. Will we be able to return to something approaching civility, even with its obvious faults? What seems clear to me is we’ll have to actively work for whatever civility we want – and work hard.

We know how to recover from a hurricane. But how do we remake our country after this disaster? I doubt anyone really knows. But on Nov. 9, we’ll have to use every tool we have to start.

Published in the Durham News on October 19